Why are people moving to Austin?

Austin has reached the top of the media charts on multiple occasions; among others, Forbes Magazine named Austin Best Big City for Jobs. US News called our city the Best Place to Live in the U.S. If that wasn’t enough, The HuffPost declared Austin’s Most Millennial-Friendly City. With these impressive credentials, no wonder that the word spread around so quickly, and to this day, Austin keeps adding more and more top talent from around the country, and the rest of the world is attracted by the promise of a better life. The vast transformation this has brought along is shown in many ways today, from multiple skyscrapers popping out everywhere, the tech startups vibrant scene, and big names such as Tesla picking Austin as their new headquarters, every new addition is changing the cityscape and creating unique new qualified job opportunities, especially for the technology fields.

As a result of this accelerated growth, the new neighborhoods and new buildings are rapidly outpacing the older, more traditional areas, giving the impression that everything is new in Austin; you can now see massive overpasses, commercial developments, and beautiful residential and commercial developments and new shiny cars everywhere. It seems like a Cinderella-like magic wand was waved around all over Austin and its surrounding cities making everything look awesome.

Do you miss the glam and entertainment of places such as Los Angeles? Austin is not only a paradise for kayakers, trail hiking spirits, and mountain bikers. The big city vibe here is electrifying, starting with the food and restaurants, which are unbelievably diverse and top of the world, including the ever-growing vegan culture. Of course, the world prestige of our film and music festivals (Austin City Limits) always attracts big-time celebrities, and more of them are choosing Austin as their new home. We have Matthew McConaughey & Camila Alves, Elon Musk, Robert Rodriguez, Sandra Bullock, Emma Stone, Paul Simon, Willie Nelson, Joe Rogan, and many others. Big events such as the Formula 1 or Moto GP also bring sports enthusiasts to the city every year.

Austin is not only another Silicon Valley; it’s quickly transforming into a film industry metropolis with many top-tier sound stages available and renowned film studios producing here, so your chances of randomly meeting a big star in person in Austin are increasing every day.

What about education? According to the UT news website, the University of Texas, today ranks among the 4 top public universities in the US, a solid argument when considering your children’s education. As a fun fact, what do Owen Wilson, Matthew McConaughey, Janis Joplin, Krista Allen, Farrah Fawcett, Neil deGrasse Tyson, Laura Bush, and Kevin Durant have in common? All of them are UT alumni! 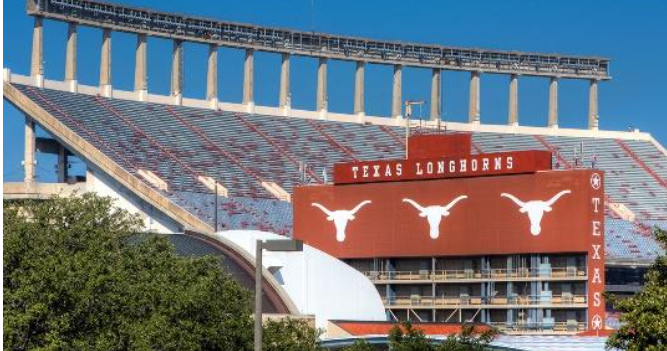 If you want to move here and you are looking for a new home, Austin and its surrounding cities are a solid choice for a long-term stay. We have it all, from the classic suburbia with its quiet neighborhoods to the Beverly Hills style mansions, elegant Mediterranean architecture, and very exclusive properties across lakeshores, top of the hill, and densely green areas.

According to the U.S. Census Bureau’s decennial census 2020, the Austin metro was the fastest growing of the top 100 U.S. metros from 2010 to 2020, adding 567,082 people and growing at a rate of 33.0%. The Chamber previously published an article covering highlights of that data. The decennial counts do not cover the components of population growth and the origins of new residents to Austin. Two other Census Bureau datasets address migration and those recent releases are the focus of what follows. 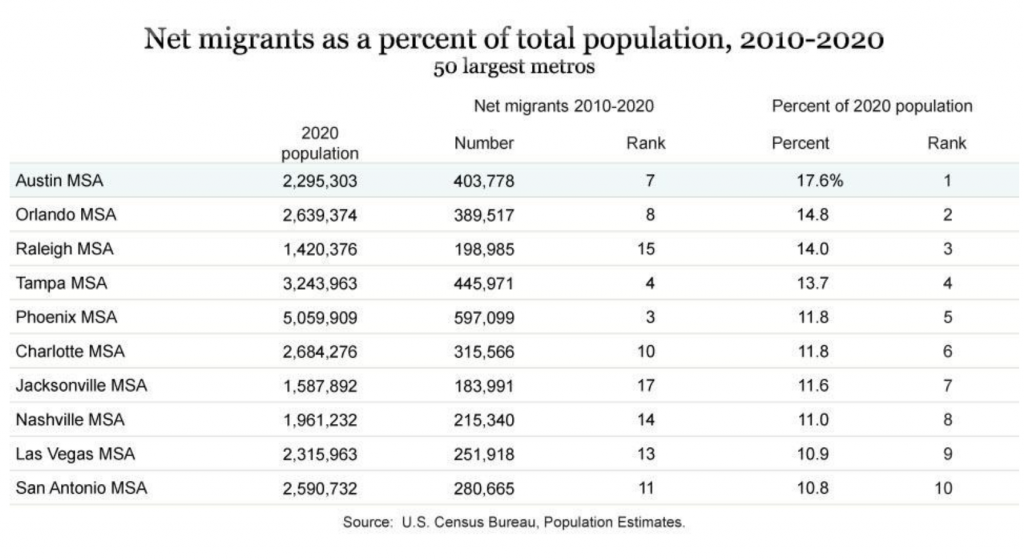 Austin, Texas is a hotspot for new businesses and large companies that are looking to expand their operations. The city has seen an increase in the number of jobs, wages are higher than the national average, and it is one of the fastest-growing cities nationwide.

This growth has attracted big names like Google, Apple, Tesla, Oracle, TikTok, and others who have relocated or expanded in recent years. Industries such as technology and healthcare have been booming in Austin and Texas could offer a lot of potential opportunities for these industries.

It seems like a new trend is for large companies to relocate and expand to Austin, Texas thanks to the low cost of living, business-friendly environment, eclectic culture, and many exciting lifestyle activities for anyone in the area. Here is a list of the previous and most recent companies that have expanded or moved to Austin, Texas.

In July 2020, Musk announced Tesla would be building a $1.1 billion manufacturing facility in Central Texas. The company is expected to produce its Cybertruck, Semi, Model 3 compact sedan, model Y, and batteries on the site, and could eventually hire up to 10,000 workers. The company has already been ramping up hiring in the region.

We also have social media giant, TikTok, which signed an office lease in downtown Austin. Sources have told Austin Business Journal that the video-based social media platform has leased at 300 Colorado and is believed to be for the top six floors that equal over 126,000 square feet. Jobs Created Upon Expansion/Move: 750

Target is said to invest as much as $5 billion this year on fulfillment infrastructure, new stores, and remodeling efforts. Austin is on the list for getting a sortation center as part of the $5 billion investment according to Austin Business Journal. The new Target sortation center in Austin will be located at 9400 Tuscany Way, an industrial pocket of Northeast.

Meta Platforms Inc. The California-based parent company of Facebook, Meta Platforms, recently leased the entire commercial half of Sixth and Guadalupe, the 66-story high-rise under construction that will be the tallest building in Austin when finished. Meta Platforms is one of Austin’s largest private-sector employers in the region. When Meta, formerly Facebook, started with 7 employees when they first came to Austin. Today, it is now home to over 2,000 local employees and is looking to hire 400 more people in its new Austin office on Sixth and Guadalupe. Meta confirmed that it leased 589,000 square feet of office spaces across 33 floors according to ABJ.

Now that Austin, TX, and the surrounding areas are so popular our INTRO program will allow you to live in a home and start building equity at your own pace while giving you the flexibility to relocate and transfer your equity to any other house within our operating cities while carrying no debt. Sign up for our website for more information on starting your journey to homeownership.